The reality of being alone on the road again hits me as I drive away from the family while they wave at me from their front yard.  I just spent the last few days with these beautiful people I had the pleasure of getting to know.

They are all from Mexico City and have been living in the states for the last few years.  The parents wanted their children to have a brighter future so they worked very hard to come  to a place they were totally foreign to in order to make their dream a reality.  I gained so much admiration especially for the father who works extra hours everyday plus side jobs so he can pay for his eight year-old daughter’s medical bills while she goes through chemo therapy.  He still somehow manages to cook dinner for everyone, take the kids to school in the morning and go out of his way to make me feel as welcome as possible.  He is worn but full of purpose, the valiant leader of the pack.

His niece and nephew who live there as well are the ones with whom I spent the most time during my stay. They are closer to my age and friends of my brother who referred me to them.  We spent relaxed days walking around the small city they live in, watching movies and gathered around the table for their uncle’s famous home-made mexican food.  We went to the local circus, clubbing in Atlanta, had impromptu dance parties with the whole family, played alien wars with the kids and talked a lot about Mexico. 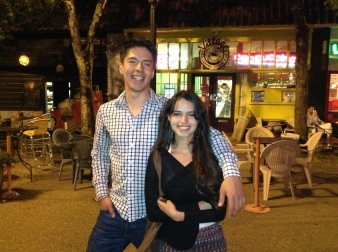 By the time I left them I learned every place I needed to visit, every food I needed to try, what to do and what not to do in Mexico.  This was really great for me because for the last few months, the majority of what I’ve heard from people has been negative after telling them my plans to travel there.  I usually find that the people who have the worst things to say are the ones who have never been there themselves.  It was the same when I used to hitchhike a lot in Europe; every person who had a negative story to tell about it had neither done it themselves nor known anyone personally who had.  I have hitchhiked thousands of miles in hundreds of cars through many countries and know many people who have as well and not once have I experienced or heard of a negative experience.

It makes sense; bad news is more exciting and people tend to prioritize preventing bad over promoting good.  It is all well intended which is important but I’m starting to think that intentions themselves are simply not enough to be a force of good.  Doing real good often takes experience, knowledge and bravery only fueled by intention.  Great deeds to humanity were not accomplished by avoiding bad but by standing taller than it and letting a beacon of good illuminate the surrounding world.

I turn out of their street onto the main road but can still feel the warmth of these beaming people as I get on my way.  I am heading north to Asheveille, North Carolina where I will stay with some third degree connections of the family I am leaving.  It’s nice to be back on the road and especially for a shorter ride in comparison to the day-long rides it took me to get here.

lending my bike for a test ride

I pass through beautiful small towns and nature of South and North Carolina with great weather until, out of nowhere, a huge down pour forces me to hang out in a Mcdonald’s for a couple hours.  I’ve heard about the infamous capricious east coast weather but am in shock at how fast it can actually change from a sunny clear blue sky to the hardest rain I’ve seen yet.  I’m only thirty miles from my destination and have plenty of time before dark so instead of the usual worry, I  calmly stare outside from inside the warm fast food restaurant and ponder.

It dwindles down to a drizzle which seems to be the best I’ll get for the rest of the day so I move on.  I finally find the house I’ll be staying at and it is in the coolest neighborhood.   I have to drive up through windy roads into the mountains, under an old-fashioned tunnel and down some narrow dirt lane to get to the three-story farm house tucked away in the forest. 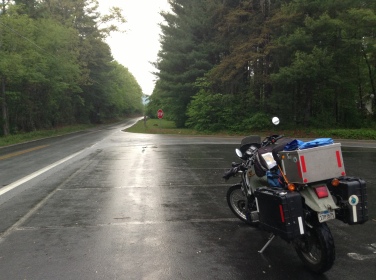 lost in the drizzling mountains near Asheville

The first thing I notice when pulling up is  motorcycles in the driveway.  One of the guys who lives there comes out when he hears me and we instantly start talking about bikes.  He knows all about mine and just recently bought something similar because he will be riding up to Maine this summer.  We hit it off right away and he shows me inside introducing me to the roommates who all make me feel very welcome.  A few of us stay up a few hours learning about each other’s lives.  I’m so happy to be with people again, especially like-minded people and to have a place to stay while it is raining outside.