The cloud of cigarette smoke slowly drifts over to the passenger side of the car where I’m sitting.  I roll down the window but it doesn’t help much since we’re sitting in dead stop traffic.  Even though this one-way street is four lanes wide, there are enough buses, taxis and city commuters to clog up each one.  In the distance, I can see the image of the church towers of San Luis Potosi’s city center rippling in the heat waves rising from all the cars.

“Eso no es vivir guey!”  Emmanuel takes his eyes off the stationary traffic and looks intensely into mine.  He tells me “that is no way to live life!”  For a second I think he is referring to the heat and congested transportation situation we are currently in but looking at his face I see he doesn’t mean that at all.  I just had finished describing the  lifestyle I had when I used to live in Europe and it’s obvious now he is talking about that.  Emmanuel almost looks and sounds angry at me for having lived in such a way.

He had asked me how it was financially possible to spend as much time as I did traveling through Europe and he didn’t get the answer he was looking for.  I told him how I managed to live off as little as a dollar a day by hitchhiking, sleeping in my tent or people’s homes, and eating left-over food from trash cans or empty tables at restaurants.  The food part seemed to cause a visceral reaction in him, as it understandably does for many people.

I sense though that it is not the thought of old half-eaten food causing the anger betrayed by his tone.  Emmanuel is a few years older than me and has been wanting to travel to Europe all his life but has never made it.  Like so many others I’ve met here in  Mexico, one of the first questions I received from him after hearing about the trip I’m currently on is “who’s paying for it?”  This is a very understandable question to be asked while in a country whose wages are far lower than the one I come from.

Emmanuel seemed eased by the fact that, although I’m funding it myself, I could earn more money compared to him working an unskilled job in the U.S..  It seemed to make him feel less responsible for his inability to reach Europe.  But hearing stories about how little money I traveled in Europe now just put him back in a state of unease.

“‘Vivir’ significa algo diferente para cada uno”  I tell him that “‘to live’ means something different for everyone”.

I watch his hand as he adjusts his oversized, shiny Rolex watch he had sent to him from the United States, costing the price of a few months of travel at my “sub-life” standards.

“I understand that many people wouldn’t want, or be able to, travel in the way I did but I also wouldn’t want to live in the way many others do either.”  I look back out to the city traffic, to all the faces of people coming home from a hard day of work and am thankful for the freedom I’ve experienced and am experiencing again in my life.

“Verdad” he concedes.  “Everyone has a different way of life but I personally would never want to do that.”  He takes another drag from his cigarette.  I point to an interesting looking building to our left and ask him what it is just to change the subject.

“What! You didn’t see that yesterday!?”  He seems offended that I didn’t visit this historic-looking building yesterday when I spent the day exploring the city alone while he was at work.  The truth is, I just walked in one direction for hours and discovered random little streets and sketchy neighborhoods. 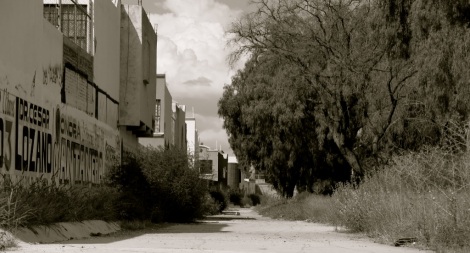 “No, I didn’t get a chance to, why what is it?”  I ask him, pretending to not have heard the offense and shock in his voice.

With a roll of his eyes he brushes it aside and starts to explain the history of the building.  I can tell he loves being the tour guide as much as he loves giving me a hard time…

He told me earlier that he was bullied as a kid and I’ve seen the effects of that bullying in my short time with him.  Emmanuel is unusual in that he is very kind to me in an almost hostile way.  He’s taken many shots at me, mocking my american accent but saying that my spanish is good.  He is quick to laugh when I’m ignorant of a fact but tells me that it’s understandable I wouldn’t know it.  As soon as he found out that I intended on traveling to South America with the motorcycle he only had a handful of horror stories to try to scare me with.  Something about my existence seems to pose a threat to him.

I’ve often been exposed to this sort of subtle bullying disguised by compliments.  It makes me feel vulnerable and sensitive but seeing through the attacks help me to not take things personally.  Each day actually, he seems to be a bit kinder and open to me maybe after realizing I’m less of a threat to him than he expected.  I’m not here to compete or put him down for the sake of self-defense as difficult as it is to resist that temptation.

I’m trying my best to take this opportunity to practice patience so that in the end we can both come out on top.  I truly hope that he makes it out to Europe.  I know it would fulfill him to accomplish a goal and he would probably have less of a reason to start relationships in a defensive way.  I’m sure he eventually will make it there but first he needs to pay off his new set of braces as well as save up for some years to get plastic surgery on his nose, which looks fine to me.

Even though I worked hard and saved hard for years, often I feel somewhat guilty to have been able to earn money comparatively easily to travel through this country when I see so much poverty.  How did I earn to be born in a country where unskilled jobs pay well and are easy to find (despite what many complainers at home will say).  I feel for people, who, because of local economics, will never be able to do what I’m doing.  I also realize that Mexico has many more resources and opportunities than the stereotypical image of it has led me to believe most of my life.

What I hope for Emmanuel more than him making money fast enough to be able to get plastic surgery, buy more watches and fancy clothes, is that he feels good enough about himself to not need to hide behind an image that costs so much.  That he can accept his crooked teeth, big nose, standard clothes, act his wage and prioritize his true desires.