Vibrations get picked up, electrified, sent through a cable, amplified, then come out as sound through speakers.  The sound bounces off of every wall including the far end of the large room and the high ceilings.  Along the way it meets sounds from another set of speakers and they have a little conversation while they bounce off walls and ceilings together.

I’m only an instrument.  Somehow I can’t claim ownership of any of these sounds.  It’s been a long time since I’ve felt this way and experienced looping.  I’ve put too much pressure on ownership of sound and perfection.  I forget I’m an instrument and that I only have control of a part of the electric loop. 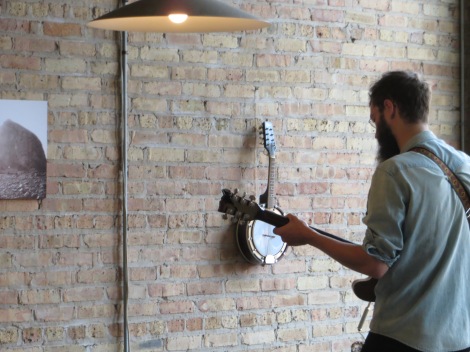 The guy I’m staying with playing the keyboard a few feet away told me that there is something special about the location we are at right now.  Urban folklore has it that just behind the building we are in , in some small alleyway, is some sort of vortex of positive energy.  I’m skeptical and deep down doubt that is true but I consciously choose to just believe it, at least for now.  It can’t hurt to believe it and it makes things magical.

I don’t know if it is because I’ve ridden the last four days in rain and cold, that I have a great place to crash for a couple of days, because I get along really well with this guy or if the positive energy vortex is real but I do feel something.  It’s a sort of elation that can be measured by the frequencies coming out of the electric guitar in my hands.  It may not be the best music but it feels the best.  I’m in a state of flow where time seems both endless and short.  Memories mean nothing, plans mean nothing, nothing means anything but life feels meaningful.

My introduction to Chicago has been wonderful and a bit scary so far.  I had been warned about the bad neighborhoods in south Chicago and because of my curiosity and not wanting to pay the freeway tolls, I drove through them.  I’ve been to many bad neighborhoods across America and in other countries but there was something different about this place.  The streets looked as if they hadn’t been worked on for decades with weeds poking out of every crack.  Every row of houses looked abandoned with broken or boarded up windows, three-foot tall weeds as lawns, piles of old rusty trash strewn about, holes in rooftops, shingles missing.  Everything about the place looked and felt like a ghost town except for the fact that there were a couple of cars driving around, women pushing cheap plastic strollers and a couple of people hanging out on the stoops.

I got lost for about an hour in the inhabited ghost town and didn’t take out the map on my iPod in fear of being shot.  I eventually found my way and changed worlds in an instant from ghost town to thriving metropolis.  A few hours later I somehow found myself at a gay, lesbian, transgender, transsexual event in a park where I just stopped to juggle.  I met a lot of cool people and was fed veggie burgers and cookies.  The girls or boys, or whatever they were, were super open and kind to me.  It was nice to have people to hang out with in my first hours in the city.

The guy I’m playing music with now is a friend of a friend of a friend who is letting me stay a couple of days.  I was expecting to be sleeping on the floor of some small apartment far from the downtown area, which is what I would expect from someone my own age.  To my surprise, this place is one of the coolest and biggest apartments I’ve ever been to.  The ceilings are about twenty feet high, there are five bedrooms, a personal rooftop, balcony, huge living room and basement just as big as the apartment.  I’ve gotten turned around and lost a couple of times already inside this place.  It’s right close to downtown in an industrial area with no apartment buildings nearby  It is actually an old converted factory or warehouse of some sort.  I thought that the barn in stayed in last night was a luxury. 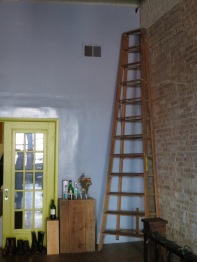 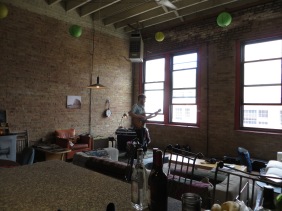 The size of the place or how beautiful it is doesn’t matter as much as how good I feel here.  The guy that is hosting me, Joe, is a cool and kind dude.  We connected right off the bat and share similar interests; photography, music, travel…  Everything about the last two days has been good and I don’t feel like I’m traveling but like I’m just living.  This is my life, barn one night, luxury apartment the next, hungry one day, veggie burgers and cookies the next, long silent rides, then beautiful music.  It’s not about the good things; the music, foods or comforts but the change.

Just like in music, you can have the most beautiful chord but if it’s played over an over it is boring, meaningless.  It is the change from one note to another, the space in between the notes, the dark, the bright that paint the picture.  The change tells a story.  All the notes, electric loops, noises, amplifications, diversifications, changes and lacks of change swirl in the vortex.  Nothing makes sense, it just swirls, makes loops and breaks loops.  Music permeates the room, bouncing off of the photos on the wall, books on the table, the coffee in our mugs.  Every moment it is changing and telling a story that words cannot.  A musical narrative written through us, the instruments and everything else that we could never understand with thought.