This place is so hot and muggy.  I’m shirtless, only wearing light shorts and I’m drenched in sweat.  I don’t mind at this point, I feel on top of the world.  The very same world that had been turned upside down two weeks ago has suddenly been righted…

It’s a funny thing, the idea of acceptance and adaptation.  I had my mind-set one way, everything got turned around, I took a while but I readjusted and accepted my new reality, even welcomed it and now it’s all been flipped again.  I haven’t fully grasped it yet but I have a long sweaty walk to think.

When I found out my motorcycle had been stolen two weeks ago, I was able to accept it logically.  Deep down though, I held on to a hope that I would  turn the corner and miraculously find it.  Every time I’ve heard a motorcycle since then I would quickly turn to see if it was mine driving by.  I knew I was beginning to go overboard when I found myself looking under the covers of other people’s bikes to check it they were mine.

I knew logically I had to accept it, that there was no other smart choice, and I did, for the most part.  I have been checking flights everyday for home, I contacted people from my old work to see if there were any opportunities to get my job back, started looking up bikes in the LA area to buy so I could restart the process of modifying and preparing to get back out on the road.

I didn’t manage to actually buy a plane ticket home, cancel my insurance or anything like that, not out of laziness but because I never really fully accepted the reality that this leg of my trip had been cut off.  The funny thing is that only about three days ago I started saying things like “It’s never coming back”, or “it’s surely been torn apart and sold for parts” which I never used to say.

I was just in Philadelphia for the weekend visiting family and decided that when I would return to New York on Monday I would finalize things by canceling my insurance and buying my plane ticket.  I had finally given in and accepted defeat.  I actually more than accepted the new reality, I was excited to go home.  I already had plans for projects, friends I wanted to see and things to do while I would be getting ready to set off again.

Now as I push this bike through the busy sidewalks of Brooklyn I’m beginning to accept that I actually won’t see my friends as soon as I thought, have to cancel plans in my head, re-readjust.  I’m sort of getting used to this idea that so much is out of my hands and a plan is only a plan, a blueprint on a flimsy piece of paper in the wind.

People stop me at every block asking me what is wrong with the bike and why I’m pushing it.  I guess it must look unusual to see a white shirtless guy pushing a bike with no license plate down a busy sidewalk.  I want to get it back as fast as I can to be seen by the fewest amount of people.  I don’t know under what circumstances it was found by the police but I’m paranoid there are some guys in the neighborhood wondering why their new bike got towed or even angry friends of a recently arrested thief looking for revenge.  I don’t trust the neighborhood.  I feel my faith in people faltering against my own ideals.

I finally make it back after pushing it the 30 some odd blocks and it dawns on me that I have no way to lock it up.  They had sawed off and snapped my original two locks.  I can’t leave it here now and I’m definitely not pushing it around town with me to shop for locks.

I spend the next several hours sitting 100 ft. away from the bike watching it and everybody who looks at it.  I’m convinced they’re coming for it and they know exactly where to find it, having stolen it from this very spot.  As night approaches I start to get worried that I won’t have anything else to do but sleep out here with the bike.  My last hope is that the motorcyclist neighbor might have an extra chain and I’m lucky to find out he does when he gets home from work.  He laughs when he finds out I had been waiting outside with it all day.

“They’re not gonna take it again” he says, “they couldn’t even get it running and probably ditched it.”  He shows me that the gas cap hasn’t been busted which means they never put gas in it and it is still just as broken down as it was when I  arrived here that rainy day six weeks ago.

I feel a bit silly for being so paranoid but I would feel even more silly if it got stolen a second time.  I’d rather err on the side of caution.  I thank the neighbor and free myself of the bike, finally going inside.

So, the journey begins again… next step: the long list of replacing and repairing all the was stolen and broken on the bike; a new little adventure… 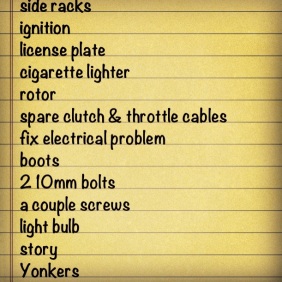